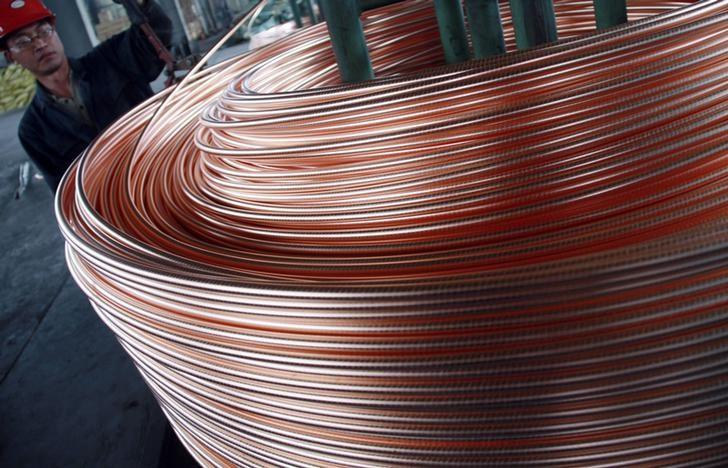 (The opinions expressed here are those of the author, a columnist for Reuters)

Imports of unwrought copper were a whopping 618,000 tonnes in October, bringing the year-to-date total to 5.6 million tonnes, already a record annual high with two months to spare.

This surge looks like a re-run of the financial crisis a decade ago.

Then, as now, China sucked up the rest of the world’s copper surplus on a combination of low prices, stimulus-induced economic recovery and a wave of stock-building, both commercial and strategic.

What has changed this time, however, is that the buying spree hasn’t extended across the base metals spectrum as it did in 2009. Only aluminium is showing a similar import boom but there is no sign of China having any import appetite for the other base metals.

This is significant for future price differentiation.

China is clearing the rest of the world’s copper surplus and to a lesser extent its aluminium surplus, but excess zinc, lead and nickel is being left to accumulate in cold storage.

The ratio of refined metal has been averaging about 70% this year, meaning last month’s tally of copper in this form was around 440,000 tonnes and the year-to-date count 4 million tonnes.

Low prices early in the year, when London Metal Exchange (LME) copper sank to $4,371 a tonne, have looked even more enticing for the world’s largest buyer through the prism of its appreciating yuan currency.

Demand strength from a fast-recovering Chinese manufacturing sector has been complemented by a raw materials shortfall.

Imports of copper concentrate were up by only 2% in the first nine months of 2020, failing to keep pace with China’s expanding smelter capacity. The stress is evident in spot treatment charges, which have slid to eight-year lows as smelters cut conversion fees in competition for raw material.

Throw rumours of state stockpiling into the mix and you have something of a perfect storm driving these exceptionally strong imports.

China’s imports of aluminium are also echoing the previous crisis.

The country is the world’s largest producer and trade flows have historically been heavily tilted towards exports in the form of semi-manufactured products.

However, imports of primary and alloy aluminium have leapt since June after a rare arbitrage window opened. China flipped to being a net importer of the metal in all forms over July and August for the first time since 2009, though the import flood showed signs of abating in September.

Cumulative primary aluminium imports of 766,000 tonnes over January-September have not quite reached the peaks of 2009, when they hit 1.5 million tonnes. But imports of alloy aluminium have been stronger at 932,000 tonnes, compared with 243,000 tonnes in the 2009 calendar year.

Higher demand for alloy is probably also down to China’s reduced scrap intake, aluminium volumes tumbling another 49% so far in 2020.

Although there is only one historical precedent for such high imports of aluminium, there is a growing body of opinion that such surges may not be so rare in future as China nudges against its primary production capacity cap.

NO EXCITEMENT FOR ZINC AND LEAD

During the previous crisis China hoovered up large amounts of refined zinc and lead.

Analysts agree that zinc supply has been hit hard by lockdowns in South American but China’s smelters seem to have weathered the storm.

Imports of zinc concentrates rose 32% in the first nine months of 2020. Lead imports, meanwhile, fell 20%, but from a high base – imports last year were the highest since 2015.

The evidence, so far at least, is that China’s own production has been able to meet recovering demand, possibly with some help from a drawdown in stocks.

NICKEL – ALL ABOUT RAW MATERIALS

Imports doubled between that year and 2009, but there is no sign of anything similar happening in 2020.

China’s import needs have changed dramatically over the past decade, reflecting the build-out of stainless steel capacity. Stainless mills use nickel pig iron (NPI) or ferro-nickel, not refined metal.

The nation’s trade has come to be dominated by imports of nickel ore from the Philippines and, before this year’s export ban, Indonesia. The latter’s rapid build-out of NPI capacity is now tilting the raw materials flow to China’s stainless steel sector in favour of the intermediate product.

Refined nickel imports have been declining steadily since 2015 but the lack of kick from China’s ongoing demand recovery is noteworthy.

The implication is that any surplus metal built up outside of China during the lockdown freeze on manufacturing is going to stay where it is. So, too, for zinc and lead

High inventories accumulated after the 2009 financial crisis, too, but China’s imports helped to mitigate the build.

That’s not happening this time, but copper remains the stand-out exception.