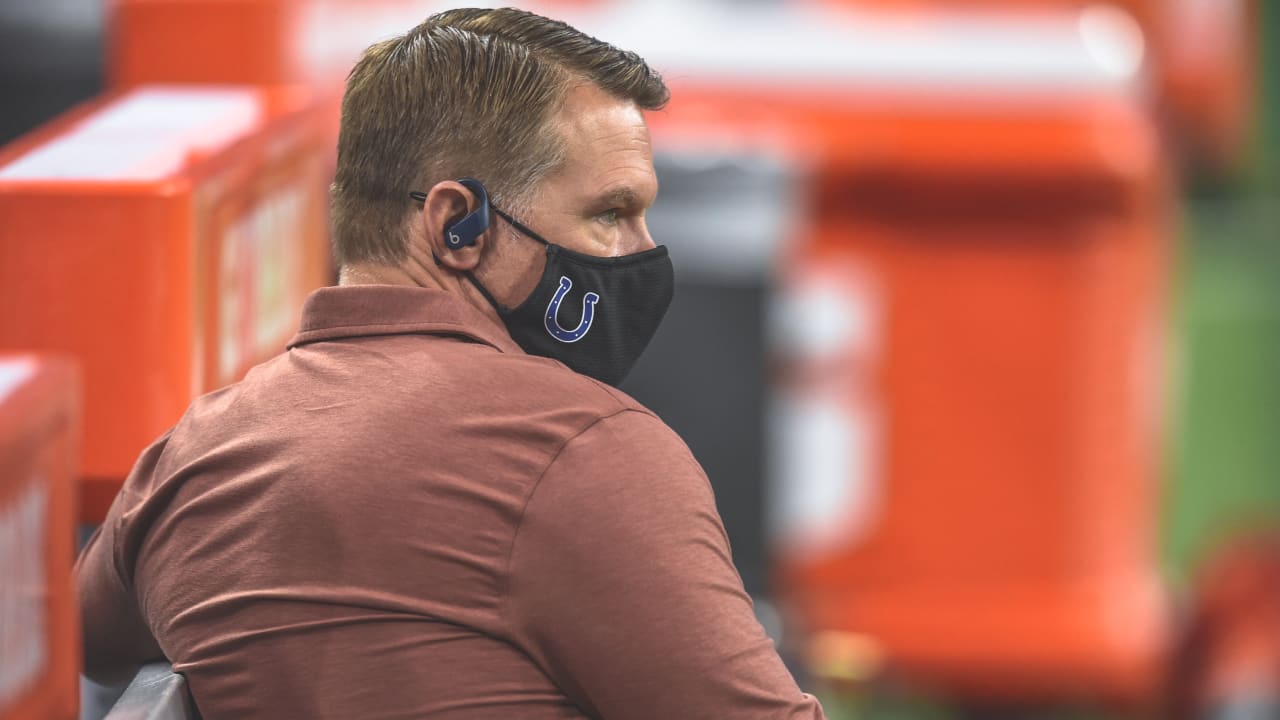 What’s your overall assessment of the team now as you sit at 5-3 at the halfway point of the season?

Ballard: “Well, we’ve had our good and not-so-good moments, but, you know, we like where we’re at. We just lost a tough ballgame to Baltimore, which, look: Baltimore, give them credit. Baltimore is a well-coached, very talented football team, and it was a battle all the way through. I think when you look at us, at the end of the day, the turnover battle in the games we’ve lost is something that we’ve not come out on top of, and we usually play pretty good and come out on top when we win the turnover battle. But we’re moving forward; we’ve got a big game against Tennessee coming up on a short week, so we’ve turned the page pretty quickly here and getting ready to play a really good Tennessee team that we have a lot of respect for.”

The defense played so well on Sunday, limiting the Ravens to 266 yards. How impressed have you been with that unit specifically here at the halfway point of the year?

Ballard: “Well, look: they’ve done a really good job. And I’ll say this: this is a team game, and you win as a team and you lose as a team. I mean, there’s going to be some games where — you know, Cincinnati, that we’ve gotta come back and win it and we get down early and our offense has to play great; there’s going to be other games where the defense plays great and the offense doesn’t play as well; and same thing with special teams. You know, no matter what type of game it is, we have to find a way to win. But in terms of the defense, no, they’re playing good football. And I think the biggest thing that I see that we’re pleased with, and we want to (do) going forward, is we’ve done a really good job limiting the big plays. I think that was a big emphasis coming into the year; I think at this point last year we had given up 27 explosive runs, and this year only 13, and we’re also down in explosive passes. So that’s a credit to Matt (Eberflus) and the defensive staff and to our players.”

Staying on defense, what parts of the unit do you see upgraded or improved this year compared to last year or in years past since you’ve been here?

Ballard: “Look: anytime you add a player like DeForest Buckner, who teams have to account for, at three-technique, it’s going to make everybody better. But besides DeForest, it’s been fun to watch these young players grow up. You know, some of them are going into their third years; Grover Stewart’s going into his fourth year (and) is having a really good year; you know, watching our young linebackers play well; Rock Ya-Sin is playing good football; the addition of Xavier Rhodes and (T.J.) Carrie have both been really good additions; and then (Khari) Willis, Khari has played really good football for us; and an unfortunate injury to (Malik) Hooker, but our rookie (Julian) Blackmon has also came in and played well. So that’s been a good sign. And, look: when you get guys that have played in the scheme for some of them two, some of them three, years, they start to really understand what needs to be done, the big picture of everything, and that’s been good. And look: (Denico) Autry’s come on here lately, Justin’s (Houston’s) played good football, (Al-Quadin) Muhammad — I mean, we’ve got a solid contribution from all of our players on defense.”

Moving over to offense, several players are getting involved every week. Two weeks ago, 11 different guys caught a pass against the Detroit Lions. Do you see that as a plus that the Colts have so many weapons to spread the ball around to on any given day?

Ballard: “Look: it’s a credit to Frank (Reich) and Nick (Sirianni), and their ability to use every player on the roster. And we knew it was going to be one of those types of years, where everybody’s going to be very important, and this last week when T.Y.’s (Hilton’s) down, you know, having players step up and play in those roles, and when they’re asked upon they have to be able to contribute and make plays. And that’s key, and the depth you have is key, because injuries happen during the season.”

Fan question from Rich: What’s going on with Jonathan Taylor and the running game? Do you think he will develop into our bell cow running back this season without Marlon Mack?

Ballard: “Ah, we’ll see. I mean, we like what Jonathan’s done. He had an unfortunate fumble on a really good run this week, just working to get extra yards, and Marcus Peters, who’s one of the best I’ve ever been around causing turnovers, he got his hand in there and knocked it out. But we like Jonathan. Jonathan’s played pretty good football for us, and as he gains more experience and continues to play, we think he’s got a lot of talent and a lot of ability, and we expect to see big things from him the second half of the season.”

Fan question from Marty: When injuries occur this season, how challenging is it to look for viable options on the open market with COVID-19 still going on and the rules in the NFL surrounding that?

Ballard: “Yeah, that’s a really good question. Look: we take a lot of pride in our practice squad, and developing our practice squad players, and our history’s kind of shown that. So, the bigger practice squad — having 16 players on this practice squad — really helps. So you’re not gonna be able to — especially where the circumstances are right now in terms of the virus spreading even more — it’s hard to bring in players from outside, and then you have a six-day wait period. So you’ve kind of got who you got. We still bring in a couple guys each and every week, just to make sure we’re churning and making sure we have a good emergency list, but the six-day wait period makes it very difficult. So it’s our guys, and our coaches are doing a good job making sure we’re getting everybody involved in practice, getting everybody reps, so if they’re needed on Sunday they’re ready to go.”

Fan question from Lewis: How active was your phone and activity around the trade deadline, even though the Colts didn’t make a move? Was it less active this season around the NFL because of COVID-19 rules?

Ballard: “Yeah, I do think that. I do think that, you know, the six-day wait period and the uncertainty of future (salary) cap — you know, what the numbers on the future cap’s going to be. So we did field some calls, but at the end of the day, didn’t think we were gonna make a move just on what the other teams wanted in terms of value for the players they were shopping. But I do think COVID did play into the slow period of the trade deadline.”

Ballard: “I sure hope so. He’s been back the last two weeks in practice; we’re trying to get him ready and get him back in game shape. He had a good week (last) week. We’ll get him some work; seems to be making the right progress that we want, but we’ll have more information here come next week.”

Fan question from Landon: What has been your assessment of the offensive line this season? Are we getting as much push at the line of scrimmage as we did last year?

Ballard: “Yeah, you know, it’s funny: I was looking at just explosive runs this year compared to last year, and last year at this time I think we had 21 and this year we had 23. So we’re doing some things good. I think you’ve got to just keep running the football. I think our offensive line’s played good football. They’ve been outstanding in pass pro (protection) — I mean, outstanding — and sometimes in the run game it’s just a guy here or a guy there. We’ll keep doing it, we’ll keep running it. That’s Frank’s philosophy and our offensive philosophy. I mean, look: we’re gonna throw it; we want to throw the football. But you’ve got to be able to run it also. So we’ll continue to do that, and, you know, let it push forward. And I’ve got a lot of faith in our staff and our offensive line. We’ve got a really good group, and I think we’ll get it going.”

Up next for the Colts are the Titans on Thursday night. The Colts split with the Titans last year, both winning on the road. This is a huge test on a short week against a team that has been playing good football — what are your early thoughts on this game?

Ballard: “Well, look: one, it’s a division game, which are always critical, especially when the final standings are settled at the end of the year. And Tennessee, we have tremendous respect, from coach Mike Vrabel and Jon Robinson, their GM — Frank and I and the organization have just got tremendous respect for what they’ve built and how they’re doing it. And, look: they’re a good football team. They’re very strong running the football, Ryan Tannehill’s playing really good at quarterback, and they’ve got weapons to throw to, and defensively they just played a really good game vs. Chicago. So we expect, as always, a tough battle that usually comes down to the end, but it should be a fun one for everybody to watch, and hopefully the Colts come out ahead.”