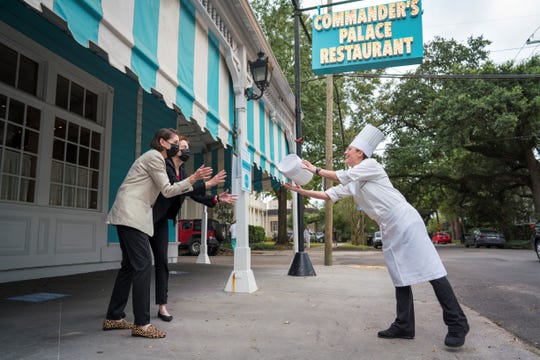 Commander’s Palace, founded in 1893, ranks among New Orleans’ most storied restaurants. It launched the careers of Emeril Lagasse and Paul Prudhomme, the country’s original celebrity chef. Now for the first time in nearly two decades, the Creole restaurant in New Orleans’ Garden District has a new executive: Meg Bickford, who was born in Louisiana to a New Orleans and Cajun family. Bickford and Ti Martin, who runs Commander’s Palace with her cousin Lally Brennan, talked to The American South about the future of the restaurant.

The American South: How does the appointment of Meg change Commander’s Palace?

Ti Martin: This whole thing is a team. That’s why it’s kind of funny for Meg and me, because everybody’s like, oh, a new chef. But this is not a very big change here other than we’re going to terrifically miss Tory (McPhail, the previous executive chef). But Meg has been a huge part of what’s coming out of that kitchen and happening in that kitchen for going on 12 years.

TAS: What do you look for in a chef for Commander’s Palace, Ti?

TM: If they’re a great cook, that is not even a third of what they need. It starts off with integrity. Caring about people. You’ve got to have people want to follow you, not by intimidation or any other way. You must have that excitement and intellectual curiosity. If you’re not permanently curious and wanting to learn, you’re probably not going to cut it. And then we get to how talented you are.

TAS: Meg, so many important chefs have worked at Commander’s Palace. How does that history weigh on you?

TAS: Commander’s has always been a classic restaurant that is not at all static. Meg, where do you want to take it?

MB: If we can look at everything that made Cajun and Creole cuisine, stay rooted here in New Orleans but get to dance around and play with all the things that have influenced our cuisine and really mine the depths of it —- that’s where we’re going next.

TAS: What does it mean that Commanders now has a female chef?

MB: To be perfectly honest with you, I’m a little torn on it. I had dinner with my parents two nights ago. My dad was a little mad that every headline that he read was so centered around my sex. I kind of feel that way. At the same time, I’m incredibly proud. If I can inspire someone to feel like they can do anything, then that is exactly what I intend to do. If you haven’t noticed, there’s a lot of women around here. There’s a lot of women that have been running Commander’s for generations. It was never lost on me that the head chef here always worked for or with women. It’s kind of a natural thing that’s been going on around here.

Note: The interview was edited for clarity and length.

News tips? Story ideas? Questions? Call reporter Todd Price at 504-421-1542 or email him at [email protected] Sign up for The American South newsletter.