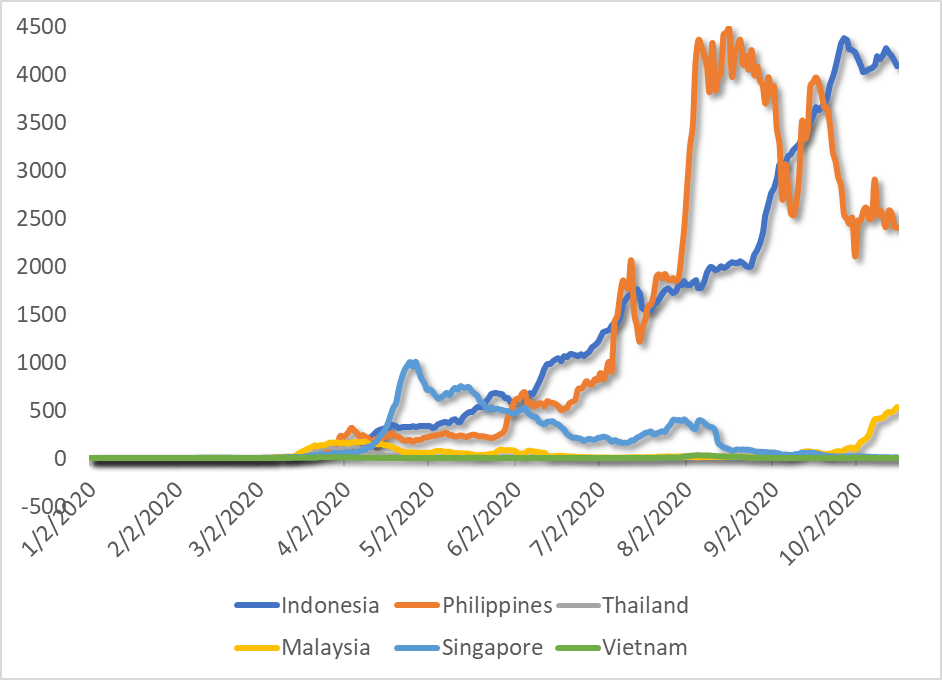 In 2021, the return to growth in major ASEAN economies rests on the containment of COVID-19, structural growth and global outlook. Due to rising deficits, debt and political volatility, the recovery will be bumpy.

Recently, the WHO stated that 1 in 10 people worldwide may have been infected by the coronavirus. Since the current world population is 7.8 billion, real infections would total 780 million rather than the 40 million confirmed cases today.

Among Southeast Asia’s major economies – ASEAN-6 – Indonesia and the Philippines have currently almost 360,000 confirmed cases each. According to WHO’s models, the real number could be 3.5 million or more.

Here’s what such projections would mean in Southeast Asia.

In light of the daily confirmed cases, the Philippines was the epicenter of COVID-19 in Southeast Asia until recently. Now that aggregate role belongs to Indonesia, where daily cases average 4,000, as opposed to some 2,400 in the Philippines. 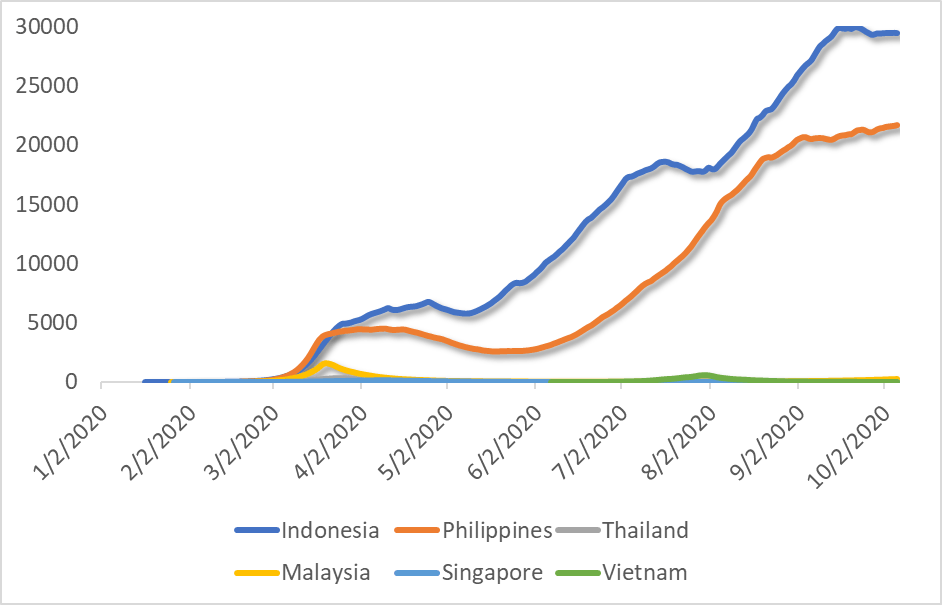 If the modeled estimates are some 10 times higher than the confirmed cases, the longer-term human costs and economic damage could prove significantly more burdensome than currently anticipated.

During the third quarter, economic outlook was downgraded for most ASEAN economies, which are currently amid a three-speed recovery.

During the summer, confirmed infections in both Indonesia and Philippines increased almost 10-fold, which resulted in major lockdowns. As a result, economic outlook in these two countries has been penalized more severely than elsewhere in the region (see table below).

However, other ASEAN economies have challenges of their own, particularly if they rely – as Singapore, Malaysia and Thailand do – on exports and tourism.

In Indonesia, the year 2020 will result in a contraction (-1.5%). If infections are not contained in the coming weeks, outlook could further deteriorate. Despite pent-up demand for consumer durables, fiscal easing is lingering. After slow disbursements until late summer, half of the stimulus package remain to be disbursed.

In the Philippines, the 2020 contraction will be severe (-8.3 %), due to COVID-19 surge in the summer, new quarantines, and the consequent fall of domestic demand. In part, the contraction has been offset by the central bank’s aggressive policy easing, net exports (thanks to import stagnation), and rising remittances.

Nonetheless, President Duterte has managed to keep his support intact, and his ratings have actually increased in the course of the pandemic. However, the hoped-for fast recovery is predicated on bending the epidemic curve, reignition of the government’s huge infrastructure initiatives and, particularly, job creation.

In Thailand, economic conditions have further deteriorated since June. As a result, the contraction (-7.1%) is expected to be worse than initially anticipated. Weak performance in the auto sector is dragging overall export performance, while tourism will continue to undermine the overall economic outlook. Though needed in the short term, fiscal easing is pushing deficit and debt levels higher.

Dire economic prospects translate to rising political unrest, which led the government to declare a state of emergency after tens of thousands of protesters gathered in Bangkok. The demonstrators are pushing for a new constitution, removal of Prime Minister Prayuth Chan-ocha, and reform to monarchy.

In 2020, Malaysia and Singapore each are expected to suffer a deeper-than-expected contraction (-6.0%). In Singapore, border closures have taken a heavy toll on tourism, although the manufacturing sector is recovering with rising industrial output.

To a degree, Singapore has benefited from Hong Kong’s unrest, which has sparked a new influx of investment, corporates and business. But Hong Kong’s volatility has also caused some unease in the city-state, which has been ruled by the People’s Action Party (PAP) since 1959.

Singapore’s recovery has been predicated on strong fiscal stimuli and thus substantial leverage. As a consequence, government debt has surged in the past two years: from 109% in 2018 to more than 142% of GDP last June.

In Malaysia, recovery has been strengthened, but full recovery won’t return until in 2021. While the recent surge in infections is manageable, recovery could prove bumpier than anticipated. Before summer, unemployment surged (5.4%), but the good news is that exports and industrial output began to recover in July.

In Malaysia, too, recovery rests on significant fiscal easing (20% of GDP), while increasing leverage has caused government debt (59% of GDP) to exceed the limit.

Among the ASEAN-6 economies, only Vietnam is expected to avoid a contraction in 2020, in part thanks to US trade and technology war against China. Improved GDP growth has been fueled by recovery in exports, which has benefited from offshored manufacturing capacity from China. Yet, foreign investment flows have fallen.

While many analysts are projecting Southeast Asia’s fast recovery in 2021, those predictions are in part optical. Due to sub-optimal growth in 2020, next year’s growth outlook will seem better than it is in substance.

Third, since most countries have had to resort to significant fiscal stimuli, they will also have to cope with higher deficit and debt burden in the future.

Finally, most analyst projections downplay the cold fact that if the US tariff wars against China (and many other major economies) will continue and further expand in Southeast Asia, the consequent trade friction and aggressive geopolitics have potential to further impair ASEAN-6 forecasts.

The commentary is based on Dr. Steinbock’s briefing on October 16, 2020.