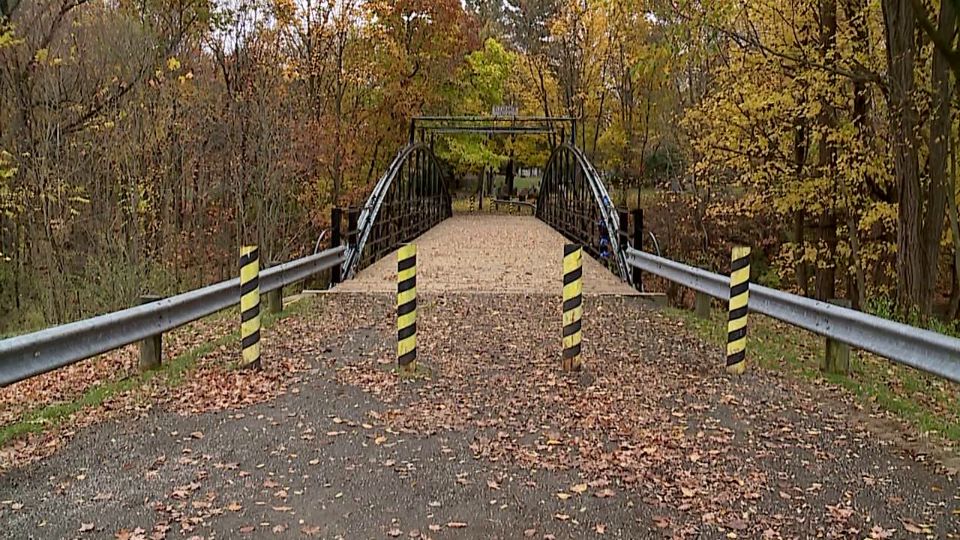 The bridge was built in 1877, and at the time it was white, so it was named the White Bridge

POLAND, Ohio (WKBN) – A bridge in Poland that connects Riverside Cemetery with Water Street (Route 616) is open now and with a fresh coat of paint.

The bridge was built in 1877. At the time, it was white, so it was named the White Bridge, but it hasn’t been that color for decades.

Poland historian Rebecca Rogers refers to it as just the Cemetery Bridge, which makes sense. Today, the black paint is a striking contrast against the colors of autumn.

“This is an extremely rare bridge,” she said.

Poland Mayor Tim Sicafuse joined Rogers for a walk across the structure. It was the first day it’s been open in months.

“This is a historical bridge in our town. A lot of people are drawn to it,” Sicafuse said. “Basically, they stripped down the bridge to the original and put back the paint to where is used to be.”

Campbell bridge painter Andreas Troumouliaris showed up to put the final touches on the $250,000 renovation project, which included cleaning the wooden deck and repainting the bridge.

A picture taken in 1947 shows the bridge was painted black by then to cover the rust that was coming through.

“If you walk across it and look carefully, it is unbelievably beautifully handmade,” Rogers said.

It’s known as a bowstring arch truss bridge and is one of only a few its kind left in the United States. The deck has been replaced, but the rest is original, including the stone pillars that support it.

“It does not have parties or events. I don’t think school kids necessarily come and do programming on it or any of those sorts of things. But as important as it is, it should have more people really knowing its history,” Rogers said.

At 143 years, we think it’s the area’s oldest iron bridge. There are covered bridges that are older.

The bridge was closed to cars in the early 1980s. It’s only one lane, so it was safe.