Erin Napier is speaking out about how the effects of the COVID-19 pandemic have been weighing heavily on her — and the comfort she feels knowing we’re all in this together.

The Home Town star, 35, revealed in March that she, her 2-year-old daughter Helen, and her 64-year-old mother had all fallen ill and exhibited COVID-like symptoms after a trip to New York in January, but were never able to confirm they had the virus.

Erin shared her feelings with fans about the ongoing pandemic on Instagram on Wednesday night, posting two photos — one of herself with daughter Helen, and one of Helen with her husband and co-star Ben, 37 — alongside a lengthy, heartfelt caption.

“Lately I find myself daydreaming about 2019 and all that we took for granted,” she begins. “I wish I could go back and spend one normal day hugging my friends and crew without thinking twice. I wish Helen could play in a park and make new friends and lick the leftover Halloween Dum Dum stickiness from her fingers without the constant low grade worry about the last time she washed her hands.”

RELATED: HGTV’s Erin Napier Making ‘An Effort’ to Step Back From Social Media After Calling Out Bullies

Please wait a few minutes before you try again.

“I wish my grandmother was still here,” she continues. Erin’s paternal grandmother passed away in early May, though it’s unclear if her death was COVID-related. “I wish I never worried when the people I love had a sniffle or sneeze, especially our parents and aunts and uncles.”

She goes on to share some things she wishes she didn’t take for granted prior to the pandemic, writing, “I miss [songwriter] John Prine [who died from COVID complications in April] and the thrill of visits to New York City on airplanes. I miss our church feeling alive and busy and the safety of Sunday school classrooms.”

“It all felt temporary for so many months, but it’s beginning to feel like part of me now, this thing I’m carrying that’s too heavy,” Erin concludes, acknowledging that the pandemic has taken a toll on her mental health. “I just miss the normal and am feeling the grief in it lately. But I know y’all do too. And I guess there’s some comfort in that. ”

In her March post detailing her experience sick with what may have been COVID, she wrote that she had been hesitant to share her story for fear it “might cause alarm,” but decided it was important to urge people to stay safe and stress the importance of testing.

She recalls that began feeling sick in late January when she woke up with some gastrointestinal issues. “I went into work because I felt mostly normal. By 5 pm, I noticed I kept getting chills and checked my temperature and it was 100. I took some Aleve and the fever dropped and I went on about my business,” she wrote. “I wrote in my journal a couple days later: ‘I feel like I have a cold, but not really. It’s like a half-cold. No congestion, but I can’t stop coughing. Still have low fever.’”

The mother of one consulted a doctor friend, who recommended that she get tested for the flu. The test was negative. “I continued to run a low fever off and on, about every other day, for weeks,” she wrote. “No medicine helped control my coughing, and it wasn’t a productive cough.”

By February 7, her fatigue “wasn’t improving” so doctors performed some blood work on her. “They told me ‘Everything looks pretty normal. Just a viral thing, most likely,’” she continued. A few weeks later, her symptoms dissipated. Her mother and Helen recovered as well. Neither Ben nor her father got sick during that time.

“A few days ago my doctor friend reviewed that blood work again and says my low lymphocytes, denoting ‘the viral thing,’ could have been a result of COVID-19.”

Erin, a graphic designer by trade, and Ben, a former church minister, found HGTV fame after a producer for the network spotted their renovation of the 1925 craftsman cottage they were fixing up for themselves in their hometown of Laurel, Miss.

Now the Napiers command a growing home-improvement empire, including their series Home Town (now in its fourth season), plus the spinoff Home Town Takeover coming in 2021, two retail stores, a book and a furniture line. 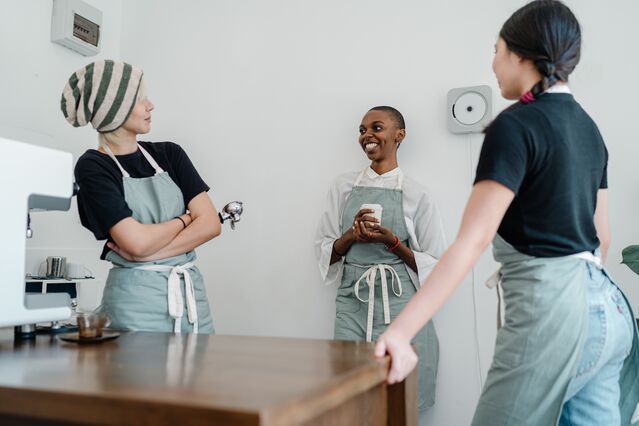