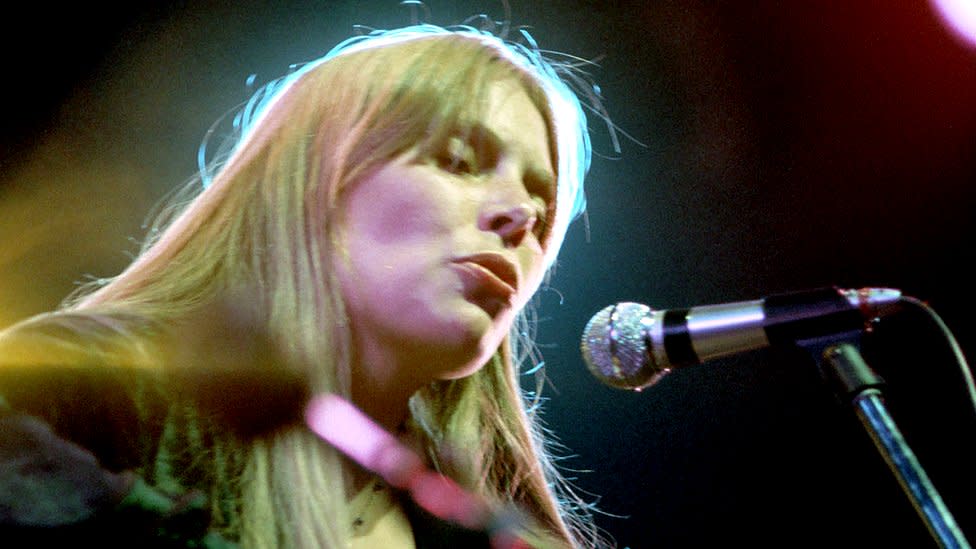 Joni Mitchell has discussed her ongoing recovery from a brain aneurysm in a new interview.

The singer-songwriter was taken to hospital in March 2015 after being found unconscious at her home in LA.

A statement on her website later said she was “resting comfortably” and making “good progress”.

But in a rare interview with The Guardian, Mitchell said she was still “struggling” to walk, and that her recovery was “inching along”.

“I haven’t been writing recently. I haven’t been playing my guitar or the piano or anything,” she said. “No, I’m just concentrating on getting my health back.”

The 76-year-old likened her current condition to the polio she suffered as a child, saying: “You know what? I came back from polio, so here I am again, and struggling back”.

“Once again I couldn’t walk. I had to learn how again. I couldn’t talk,” she said. “Polio didn’t grab me like that, but the aneurysm took away a lot more, really. Took away my speech and my ability to walk.

“And, you know, I got my speech back quickly, but the walking I’m still struggling with. But I mean, I’m a fighter. I’ve got Irish blood! So you know, I knew, ‘Here I go again, another battle.'”

The Canadian singer added that she was “showing slow improvement but moving forward”.

Mitchell is one of the finest singer-songwriters of her era – who was once described as the “Yang to Bob Dylan’s Yin, equalling him in richness and profusion of imagery”.

Her gift was for writing deeply personal, folk-inspired, song-poems that explored the darker sides of life and love – on albums like Blue (1971) and Ladies Of The Canyon (1970).

Since her aneurysm, she has made a few public appearances, most notably at a 75th birthday gala at Los Angeles’ Music Center last year.

After hearing artists like Norah Jones, James Taylor and Emmylou Harris perform some of her most well-known songs, Mitchell took to the stage (supported by two friends) as the cast sang Big Yellow Taxi. She then blew out the candles on a birthday cake.

The Guardian interview, conducted by film director Cameron Crowe, came ahead of the release of a new album, Joni Mitchell Archives Vol 1: The Early Years, this Friday (30 October).

Earlier this month, she shared a demo of Day After Day, which is considered to be her first ever original recording – dating back to a 1965 demo tape she recorded for the co-founder of Elektra records, Jac Holzman.

“It was my firstborn,” Mitchell says. “I didn’t know whether it was a good song or a bad song. It was just the first one that came out.”

Speaking to Crowe, she admitted she had been dismissive of her early songs in the past.

“The later work is much richer and deeper and smarter, and the arrangements are interesting too,” she said.

“The early stuff – I shouldn’t be such a snob against it. A lot of these songs, I just lost them. They fell away.”