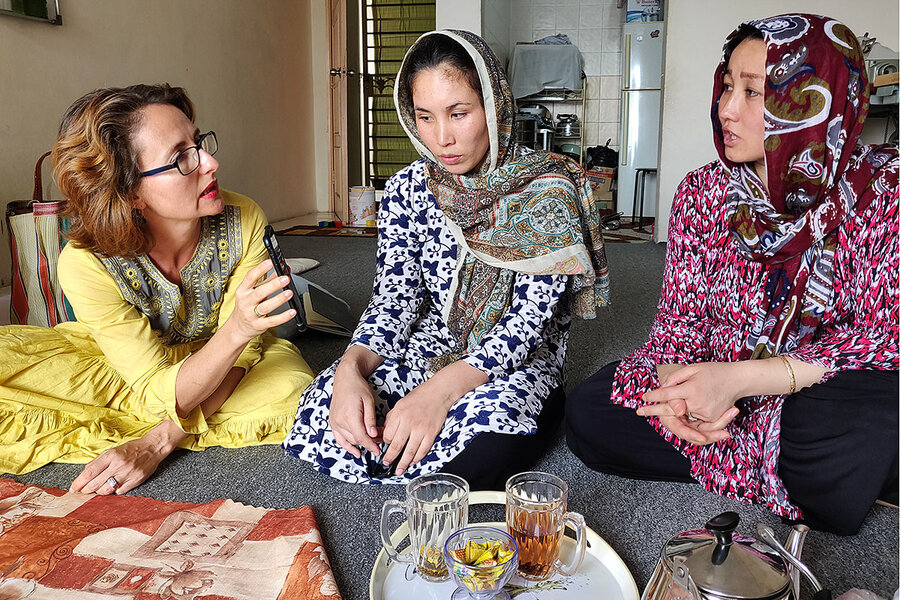 There are nearly 180,000 refugees and asylum-seekers registered with the United Nations in Malaysia. They left their homes in countries like Afghanistan, Myanmar, and Syria, and fled here on a tourist via, imagining Malaysia to be a safe haven.

The truth is that the country does not formally recognize refugee status, and finding a well-paying job is rare. Khadija’s husband, who was a tailor back home in Afghanistan, now stitches masks for less than 25 cents apiece. Her teenage son has offered to drop out of school to help his father stitch more masks in a day.

But Khadija will soon be bringing in income, too, as a chef for a nonprofit project called Meaningful Meals. Organizer Julie Das, who is originally from France, trains refugee women interested in cooking food from their country to cater to customers in Kuala Lumpur. Today, Khadija has arranged a tasting session with Ms. Das, neatly laying out chicken biryani and okra curry on a mat spread on the floor, as is the custom in Afghanistan.

The goal is bigger than providing refugees with income. “One of my tasks is to show locals how kind and brave these [refugee] people really are,” Ms. Das says.

It is barely noon on a sunny Tuesday in Kuala Lumpur, but Julie Das has been busy. She’s already met with two Afghan refugee families, and is on her way to a third – a visit she’s particularly excited about. She’s meeting Khadija, a potential new chef for the cooking project at her non-profit, Greater Action.

At her tiny apartment, Khadija is dressed in a loose floral salwar kameez and cotton shawl over her head, ready with the meal she has prepared for this tasting session. There is the Afghan version of chicken biryani, along with some herbed rice, okra curry, and a tangy green sauce with yogurt, all neatly laid out on a mat spread on the floor, as is the custom in her homeland.

Khadija came to Kuala Lumpur as a refugee late last year along with her husband and three children. Her husband, who was a tailor back home, had temporary work here until the pandemic cost him the job. He is now stitching masks for 1 MYR (less than 25 cents) apiece. In the middle of the meal, the couple’s 16-year-old son, Ali Reza, suddenly announces that he has decided to drop out of school – a local non-profit for children from Afghanistan and Myanmar, run by a team of Malaysian Chinese – to help his father stitch more masks in a day.

There is tense silence for a few minutes, before Ms. Das steps in calmly. Within the next hour, a new sponsor has been found for Ali Reza’s school fees (about $36, to cover books and lunch), and Khadija herself has been added to the chef roster at Ms. Das’ catering program.

Through this project, Meaningful Meals, Ms. Das trains Afghan refugee women interested in cooking food from their country to cater to an international clientele. Given that it is almost impossible for asylum-seekers to find well-paying jobs in Malaysia, these home cooks are often the only earning members of the family.

“We came here in search of a good life … but we have lost everything we had,” Khadija says, while Zahara, another young Afghan refugee who has picked up fluent English in her few years here, translates. She nods to indicate this was her own story, too. (The women’s last names have been omitted for privacy.)

There are nearly 180,000 refugees and asylum-seekers registered with the United Nations in Malaysia, including 46,500 children. The majority are from war-torn countries like Syria, Palestine, Iraq, Yemen, Somalia, Myanmar, and most recently, Afghanistan.

All of them left home to escape violence, and fled to Malaysia on a tourist visa, imagining it to be a safe haven. The truth is that the country is not part of the 1951 U.N. Refugee Convention, and does not legally recognize refugees, leaving them vulnerable to arrest and deportation.

It is only when they arrive that they become aware of their status as persona non grata. Asylum-seekers can begin a lengthy application process for a U.N. card providing minimal access to health care and education, but it holds no legal value. Ms. Das explains that men often end up taking on manual jobs that locals do not want, for very low pay.

Many of the women whom Julie Das’s nonprofit, Greater Action, trains to cook and cater Afghan food are the only wage earners in their family.

Newcomers also deal with xenophobia, which has become only more strident in the past few months as the coronavirus pandemic has taken its toll on the economy. “One of my tasks is to show locals how kind and brave these [refugee] people really are,” she says.

Ms. Das, who is originally from France, is a part-time teacher at an international school in Kuala Lumpur, and started Greater Action in late 2019. Of all the refugee groups in the capital, she was drawn to the Afghan community because they are the latest to arrive, with the fewest supports in place. Many are in survival mode, Ms. Das explains, and one of her aims is to help them help each other.

Her journey with humanitarian work goes back many years, following her Indian husband through Kolkata in India and Yangon in Myanmar. In both cities, she worked with underprivileged communities – particularly children – volunteering with local nongovernmental organizations to raise funds for their education and basic survival.

In Malaysia, she found waiting for the government to help refugees time-consuming and frustrating, and decided to work directly with them. She now has both a tailoring and a catering program for Afghan women, along with her fundraising efforts for education and health care.

Sakina, the 20-year-old mother of a 3-month-old boy, was the first chef on the Meaningful Meals project. Her husband has held odd jobs since they moved here, washing dishes at a small restaurant these past couple of months. “He is on his feet 14 hours a day, and hasn’t got paid even the pitiful wages he was promised yet. But there is no way to complain,” Ms. Das laments.

The stress shows on Sakina’s young, pale face. As her baby wakes up in the middle of the conversation, her husband rushes to rock him back to sleep. They share their small apartment with another Afghan refugee family they met here, a couple and three children.

Sakina’s expertise is in making Afghan dumplings known as ashak and mantu. She speaks English slowly, hesitantly, remembering what she can from her schooling. But every couple of sentences, she gets teary-eyed and breaks into rapid Farsi. “Julie is very kind and I was really lucky to meet her when I did,” she repeats over and over again. “I was pregnant and needed to find work to make some money. We were new in this country and did not know anyone then.”

Being part of Meaningful Meals can provide home chefs like Sakina and Khadija with a monthly income of up to 700 MYR (roughly $170), which seems like a small amount, but contributes greatly toward the family’s rent and groceries. Since Ms. Das’ setup is small – indeed, it is only herself, along with co-founder Shazwan Sahabudeen based 200 miles north in Penang – there is no overhead, and the money goes directly and entirely to the chefs.

There are many people with the intention to do good, who just need to be pointed in the right direction, Ms. Das says. Her support comes in the form of friends and sponsors like Stacy Blattner, an American expat in Kuala Lumpur, who calls Ms. Das a superwoman for all she does single-handedly.

Get the Monitor Stories you care about delivered to your inbox.

“She is passionate and compassionate about her work and the people she works with,” Ms. Blattner says. “Also, I know exactly where my money is going – and I can already see the impact it is having.”

A month after Julie’s visit to Khadija’s house, Ali Reza sends out a taped video message to a small group of Greater Action champions, telling them about what he has learned in school lately. Khadija’s voice cracks when she says, “Without Julie, even my children would not be able to go to school here.”