A construction, renovation and facade project at a Millcreek Township retail plaza heavily damaged by fire in May 2019 is expected to be completed in the spring.

The project began in July and is expected to finish in the spring, according to Sandra Cole, asset manager with 5130 Peach Street LLC, which has owned the Kearsarge Plaza since 2005.

5130 Peach Street LLC is a family-owned company based in El Paso, Texas, whose owners have ties to Erie, Cole said.

All of the plaza’s space currently under construction and renovation is available for lease,” Cole said. “Any potential tenant will have the added benefit of having construction steered toward their needs. There’s a lot of opportunity at this point. We’re trying to lease space for any type of business.”

“It was advised to us at one time that we should consider tearing down the entire center, but we would not even consider it,” Cole said. “It would have displaced every single business in this plaza. Our tenants wouldn’t have had a home.”

Cole declined to divulge the cost of the rebuild/renovation project.

“The cost is substantial and well worth it, and we’re willing to do it,” Cole said. “We had very good insurance from Erie Insurance. It’s not covering all of it, and the family is covering part of it. It’s an investment to the community.”

“I really admire these tenants who had the wherewithal to stay in business and be patient with us,” Cole said. “These are some of the best tenants in town. It was better for the tenants and for us to tough it out and do the rebuild and renovation, and keep our tenants inside the center. That was important to us.”

The fire on May 14, 2019, gutted the plaza’s retail space occupied by the Imperial China Buffet at 5138 Peach St. and damaged other space in the plaza.

The fire is believed to have started in the Imperial China Buffet and then spread to the restaurant’s dining room to the north and to Fancy Nail’s, 5142 Peach St., to the south, according to fire investigators. There were no injuries in the fire.

Demolition began in June 2019 on a fire-damaged portion of the retail plaza.

“The 9,000-square-foot construction is a blank slate, and we’ve had interest in the space as both whole and piecemeal,” according to Rob Shearer III, project manager for Edinboro-based Mammoth Restoration & Construction.  “We might end up with eight tenant spaces or we might end up with two. There’s no way of telling. It’s what people want and the owners are building it to suit as interested parties make themselves available.”

“All the people involved in the restoration project have been at the plaza since the onset of the project and involved in varying degrees throughout,” Shearer said. “Mammoth has performed the majority of the interior renovations primarily with the assistance of Shearer & Son, Stellmach, Admiral, Lakefront and Lesonik.”

“Some of that work was real easy, such as replacement of ceiling tiles and cleaning the carpets,” Shearer said. “It was a big scope initially and it kind of gravitated to a much larger project.”

“We were constantly doing improvement to the shopping center before the fire,” Cole said. “We had six renovation spaces before the fire. Now, everything is remodeled.”

A national-chain business, whose name will be released at a later date, will be a new plaza tenant, Cole said.

All of the new-build and renovation space is available for lease through Sherry Bauer Real Estate Services, Cole said.

“I want to talk about our tenants and the courage they have shown to stay in business,” Cole said. “They have maintained their business, and I admire them for their ability to bounce back and keep things going. We’re ready to go.”

New-build and renovation work is scheduled for completion by the end of February, Cole said.

“Between construction and COVID-19, there has definitely been business interruption,” said Barbara Raines, co-owner of plaza tenant Erie Pack and Ship, 5148 Peach St.

“People don’t know where to park and they don’t even know if we’re open,” Raines said. “It’s very difficult. Honestly, I’m hopeful for new tenants and new neighbors so that we can benefit each other.”

Shearer said the plaza’s existing tenants have demonstrated patience and resolve while maintaining their livelihood during the COVID-19 pandemic and under difficult economic challenges.

“The tenants here have been great to work with and very understanding considering the circumstances,” Shearer said. “Nobody wanted this to happen and I feel bad because I’m always the bearer of bad news. I’m glad we could help them out and I hope they don’t hate my guts too much.” 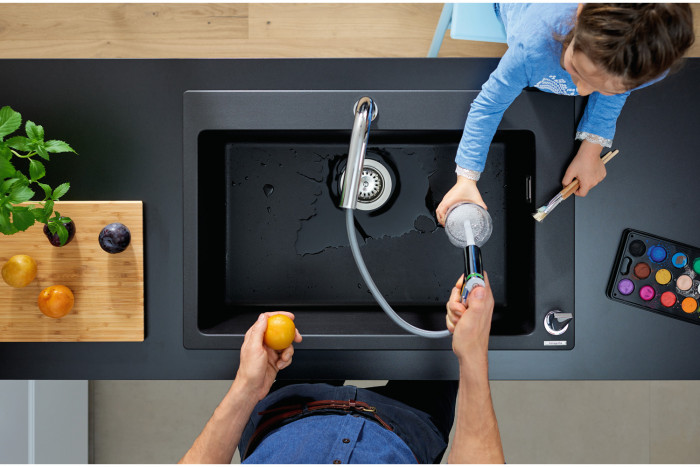