Attacking chances were slim and Nashville SC’s patience grew as thin as the browning grass at Nissan Stadium while the clocked ticked. In its fourth match against FC Dallas, Nashville’s strategy wasn’t a surprise and its home undefeated streak ended at nine matches Wednesday night.

Dallas (9-5-7)  used Ryan Hollingshead’s goal from the ground in the 19th minute for a 1-0 win over Nashville (7-8-7). The goal was widely questioned by the Nashville faithful, who argued Hollingshead was offside when midfielder Jesus Ferreira played the lob ball behind Walker Zimmerman and Jack Maher.

Zimmerman blocked Hollingshead’s first attempt with a stretched foot just 5 yards from goal, but Hollingshead slid over and wrapped the ball past Joe Willis.

With Wednesday’s loss, Nashville has dropped to eighth in the Eastern Conference (1.32 points per game), yet are still in place to host a play-in round match in the MLS Cup Playoffs.

Coach Gary Smith switched from his conventional 4-2-3-1 to a 3-5-2, with Randall Leal and Daniel Rios listed as Nashville’s designated attackers. The pair, despite cooking up a strong chemistry this season, were starved by the lack of service from the Nashville midfield. The pair created just one chance in the first half and recorded three shots in total.

Leal was substituted in the 70th minute for Handwalla Bwana, who made his Nashville debut. Rios was taken off at halftime due to an undisclosed knock. Designated player Hany Mukhtar, who was medically cleared this week, was not in the 18-man squad because of similar circumstances.

Nashville was also without striker Abu Danladi. Attackers David Accam and Dom Badji have both been sidelined with respective injuries for months.

“We fell down in the final third and it was always going to be a concern with limited attacking players,” said Smith. “And of course the quick turnaround and nature of the schedule, having to offer some other players a little bit of rest. So, (I’m) very disappointed, but certainly not disheartened with the way that the side has played.”

The first of Nashville’s two best chances came in the 35th minute. Dallas’ Thiago Santos played an arid back pass to goalkeeper Jimmy Maurer that Leal intercepted, muscled past Bressan and played a low cross to Daniel Lovitz, who tapped the ball straight to Maurer. A deflection and immediate clearance rolled to Nashville’s Dave Romney, diving into the 18-yard box, but his laser shot was blocked.

On a corner kick in the 82nd minute, Jalil Anibaba managed to settle the cross at the far post and quickly swiped at the ball, but Maurer was prepared and immediately fell to the floor to stop the possible equalizer. Alex Muyl attempted to finesse the rebound around Maurer, but to no avail.

Anibal Godoy was the destroying defensive midfielder for Nashville, surrounded by Matt LaGrassa and Tah Brian Anunga. The trio were continuously busy pressuring Ricaurte and Thiago Santos, while closing down Ferreira when the playmaker had the ball at his feet.

Rarely did LaGrassa or Anunga connect with Rios or Leal. The notable outlier was in the 38th minute, when Anunga successfully played a give-and-go with Leal, releasing him from a Dallas double team. Leal attempted to do the same with Rios, but the striker’s return pass was too hard and Dallas recovered.

“We need to do better,” Godoy. “We (have to) try to finish the action because sometimes, when the game is like this — too close — if we have only one chance, we need to score with this chance because I don’t know if we’ll have another chance.” 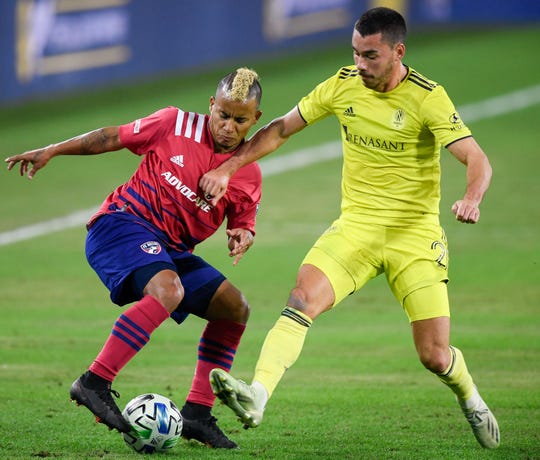 Muyl called playing at Nissan Stadium “a fortress.” Smith has said in recent weeks his postseason objective is to begin the playoffs at home.

The last time Nashville had lost at home was its inaugural MLS match Feb. 29 — a 2-1 loss to Atlanta United in front of a record soccer crowd in Tennessee (59,069).

Wednesday was Nashville’s regular-season home finale, ending with a 4-2-5 record.

“I will reinforce this: we didn’t earn any points tonight,” Smith said. “And unfortunately, there are going to be games where you have a real go at it. You really shove all the energies and the qualities that you hope from a home team and you don’t win. You don’t earn any points, and we don’t score goals.”

Nashville will travel on Decision Day Sunday to Orlando City (11-3-8), which has not lost at home this season. The Lions’ home record is 6-0-3, and no team has scored more than one goal at Exploria Stadium in that span, while Orlando has scored 20.