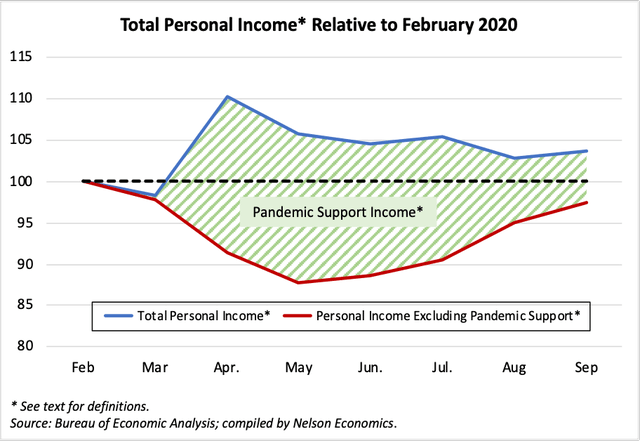 Slowdown? What slowdown? The first estimate of third-quarter GDP growth far exceeded the reigning record for economic growth in a quarter, despite still onerous constraints on economic activities. The Bureau of Economic Analysis (BEA) estimated quarterly real growth of 7.4% over the second quarter, or 33.1% on a seasonally adjusted annualized rate, topping even bullish consensus forecasts. Meanwhile, the Bureau of Labor Statistics last week reported that employers continue to add an impressive number of jobs – also topping estimates – even if the pace keeps dropping.

An Impressive But Incomplete Rebound

Though the GDP rebound was certainly welcome and may even herald the end of the recession, as I ventured in my GDP preview article, the economy is hardly back to pre-pandemic conditions. Even with extraordinary growth doubling the prior record, real GDP is still 3.5% below its level at the end of last year (Figure 1). For comparison, that’s almost the total output loss sustained in the entire Great Financial Crisis (4.0%) from late 2007 through mid-2009, which had been the greatest decline since the 1930s. We’re also still 5.1% below where GDP would be if growth had continued on-trend from the end of 2019. 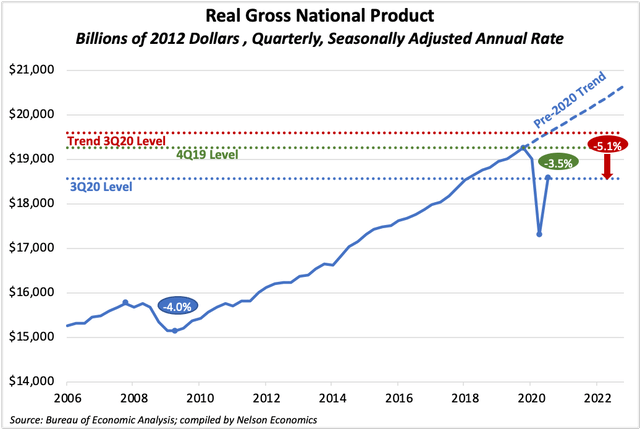 So, a great start, but the recovery is not yet complete. What next? Will the “V-shaped” recovery continue, or will the recovery flatten, or even turn down again? I think we already know the answer to the first part of the question: the V-shape will not continue, at least not at its third-quarter trajectory. There are already clear signs that the rebound has begun to lose steam.

By now, we can assume that most businesses that could reopen already have and that firms have already rehired most workers needed to support their anticipated volume of business. And the reverse is also true: The longer that firms remain shuttered or operating with limitations, the greater the likelihood that they will not survive the downturn, and the greater the damage to the economy.

Firms certainly faced challenges in learning to operate during a pandemic. But restarting and retooling an existing business is relatively quick and easy compared with creating whole new enterprises to replace bankrupt firms. Moreover, large swathes of the economy – travel, entertainment, recreation – remain either shackled or shuttered due to health concerns and are looking less likely to resume anytime soon as the country endures a third wave of infections greater than the first two. Growing further will take more time and effort.

And now, signs of decelerating growth abound. Though businesses continue to add jobs at historic rates, the pace has been declining, while layoff announcements are mounting. With the expiration of the “payroll protection program” this summer, millions of furloughs are now converting into permanent layoffs because their firms still cannot operate normally, as I explained in a recent article. Fiscal woes facing state and local governments are forcing millions more workers off their payrolls.

These job metrics mirror trends in other high-frequency economic data. The Opportunity Insights economic tracker shows that the number of small businesses open has not risen since July and declined in September. Meanwhile, the Federal Reserve reports that the rate of growth in industrial output started to fall this summer and actually turned negative in September. However, on a more positive note, business sentiment for manufacturing and services measured by the Institute for Supply Management is trending back up and remains firmly in positive territory.

Taken together, these indicators suggest that fourth-quarter growth will slow materially from its torrid third-quarter pace. Further, the surging COVID-19 infections will raise the challenges to businesses and governments this fall and winter. The coming of colder weather portends continued infection spread as more people spend more time inside together, at least until a vaccine is widely available. In most of the country, the colder weather also means that some businesses – like dining and health clubs – that were able to reopen only by moving previously indoor activities outdoors will now be forced to close again. Economic growth is thus sure to reverse in some key sectors this winter.

There are also strong hints within the GDP report itself that economic conditions are less positive than they appear on the surface. Most notably, consumer spending – and by extension, GDP and the economy itself – has been propped up by an unprecedented degree of government support. Personal Income, which is the sum of all wage, rent, and business income, has actually increased during the pandemic (the blue line in Figure 2), which is most unusual. Even with automatic stabilizers (like unemployment insurance and food stamps) and classic Keynesian stimulus programs (like tax cuts, direct cash payments to households, and infrastructure projects), income invariably falls during recessions, though theoretically less than absent the government intervention. 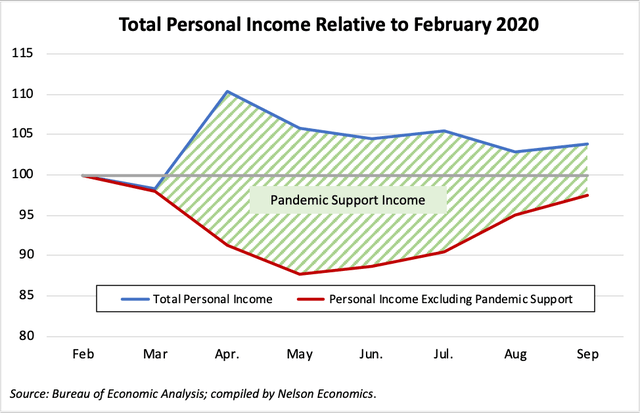 Not this time. Incomes rose 10% above their pre-pandemic level in April and have remained elevated since. But this exceptional rise is explained entirely by the pandemic income programs (the green shaded area) funded by the Coronavirus Aid, Relief, and Economic Security (“CARES”) Act, and, to a lesser extent, state unemployment programs. Excluding this funding, Personal Income would have declined more than in any recession since the 1930s (the red line in Figure 2).

The extent of support is staggering. Together all of the programs[*] funded through the CARES Act, including state unemployment insurance benefits, accounted for 16.5% percent of all income in the U.S. during the second quarter (the light blue segments in Figure 3). This support began to decline this summer as programs either expired or expended all of their funds but still accounted for 9.3% of all income in the third quarter through September. 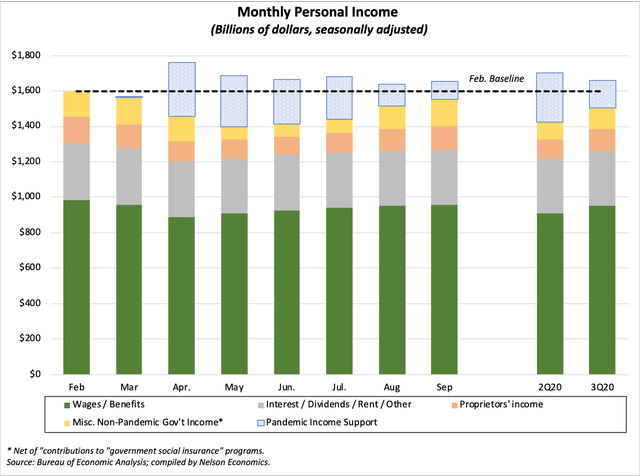 That’s a lot of support: $1.3 trillion overall (that’s trillion with a “t”!) from April through September or an average of $218 billion per month. For context, that translates into more than $1,740 per household for each of the past six months. Without this support, Personal Income collectively would have been $784 billion less over the past two quarters. Instead, income rose $523 billion overall. As severe as the economic decline has been during this pandemic, the losses would have been far worse without this massive infusion of income support. And now, that support is now largely disappearing with the expiration of the CARES programs.

Nonetheless, the Personal Income Report also brings some undeniably positive news. Savings are up. Way up. (And the actual figures could be even greater, a topic I’ll return to in a forthcoming article.) Households clearly have been socking away much of the pandemic income support that the government has been doling out. In fact, the increase in personal savings during the recession amounts to almost as much as total pandemic income support, at least according to the way that government statisticians calculate savings.

Perhaps, counterintuitively, savings rates normally rise moderately at the beginning of a recession as households turn cautious and cut spending more than their incomes decline. In turn, these cutbacks in consumer spending intensify economic downturns and are a key justification for countercyclical income support programs to maintain consumer spending. Conversely, savings rates typically fall as the recovery begins, as consumers feel more confident and begin to spend a bit more in anticipated of rising income ahead. But the shifts in consumer behavior are usually quite modest.

Not so in this recession. Savings soared more than four-fold from February to April (Figure 4), as the savings rate jumped from 7.3% to 30.3% of Personal Income. Both the total dollars saved per month and the savings rate have since declined significantly but remain almost twice their pre-pandemic levels. In sum, Americans have hoarded an extra $1.2 trillion above the February savings rate, or almost $1,600 per household for each of the past six months.

That’s an immense reservoir of savings that should both cushion any future income shocks and keep consumers spending, at least in theory. Unfortunately, these figures do not represent actual stockpiles of cash that people are depositing into banks or storing under their mattresses. Rather, this savings figure is best thought of as a government accounting conception that is only loosely related to actual financial savings. (For example, the government accounts impute housing payments for all households based on the estimated value of their homes, even if they make no mortgage payments or live in an apartment rent-free.) 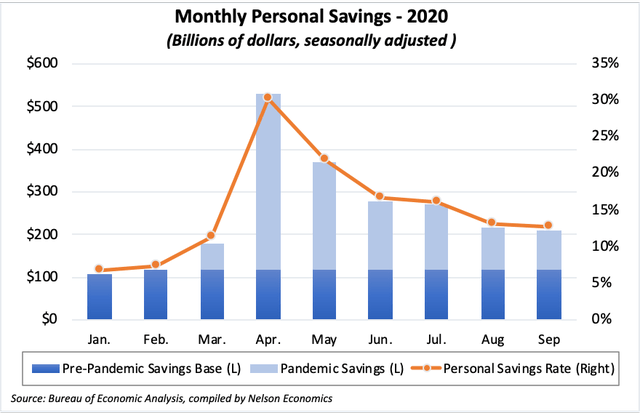 Nonetheless, other metrics confirm that households are saving a lot more now than before the recession. For example, one survey of consumers by the New York Federal Reserve revealed that consumers spent an average of only 29% of their initial stimulus checks (those one-time $1,200 checks), while saving 36% and using 35% to reduce debt (Figure 5). Similarly, workers collecting unemployment insurance spent 29% of their payments, though saved only 23% and used 48% for debt reduction. More extensive ongoing surveys by the Census Bureau show similar patterns of consumer spending and savings of supplemental income payments during the pandemic. 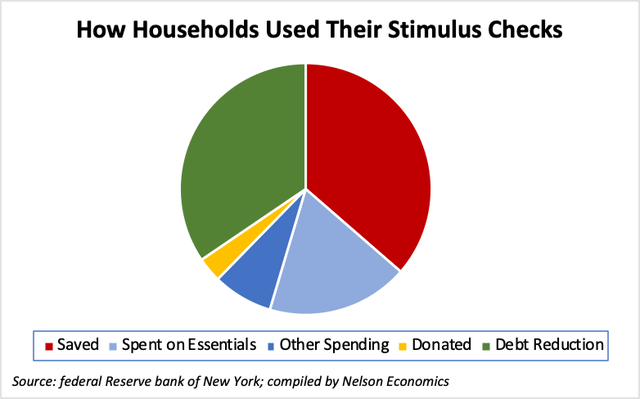 In addition, bank deposits are up. Though updated only through the end of June, data from the Federal Deposit Insurance Corporation (FDIC) shows the giant spike in U.S. bank deposits this year. After averaging quarterly gains of about $140 billion over the past two years, deposits surged more than $1 trillion in each of the past two quarters. Again, most unusual for a recession. 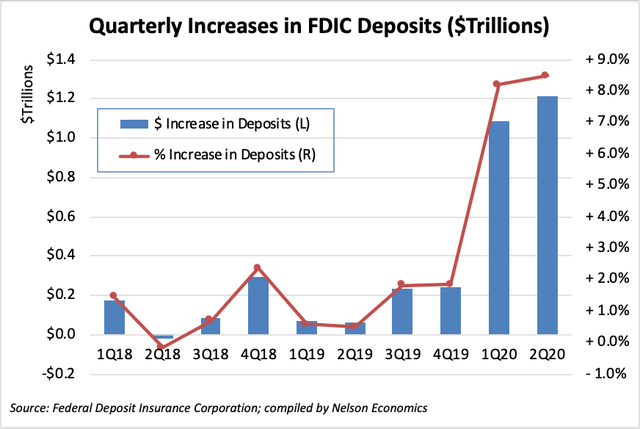 Not all of this increase in bank deposits can be attributed to households. An unknown share came from corporations and offshore entities, though, given the financial strains many businesses are facing during the recession, those contributions are likely to have been small or even negative.

In sum, there’s no doubt that households have dramatically increased their savings this year. These savings will be crucial for maintaining consumer spending in the coming months. Deferred rent bills and mortgage payments are coming due for millions of households, along with the loss of unemployment benefits. These savings will tide over countless households.

At some point, Washington may finally step in with another round of stimulus. Though the economy has regained much of what it lost during the early weeks of the pandemic, and jobs and output continue to grow, much more remains to be done. Millions of people remain out of work, and output is still down meaningfully by historical standards. Meanwhile, the current spike in COVID-19 cases continues to climb, likely to prompt another wave of lockdowns or other forms of restrictions on commercial activities.

Even the most optimistic scenarios for vaccine development and distribution anticipate that we won’t be able to fully resume our normal activities until the middle of next year. Millions of businesses will not survive, further impairing the economy’s potential to right itself. In short, economic risks seem heavily weighted to the downside – ample justification for more pandemic relief. Until then, savings accumulated during the downturn should enable consumers to maintain spending for a while longer and limit near-term damage to the economy.

Disclosure: I/we have no positions in any stocks mentioned, and no plans to initiate any positions within the next 72 hours. I wrote this article myself, and it expresses my own opinions. I am not receiving compensation for it. I have no business relationship with any company whose stock is mentioned in this article. 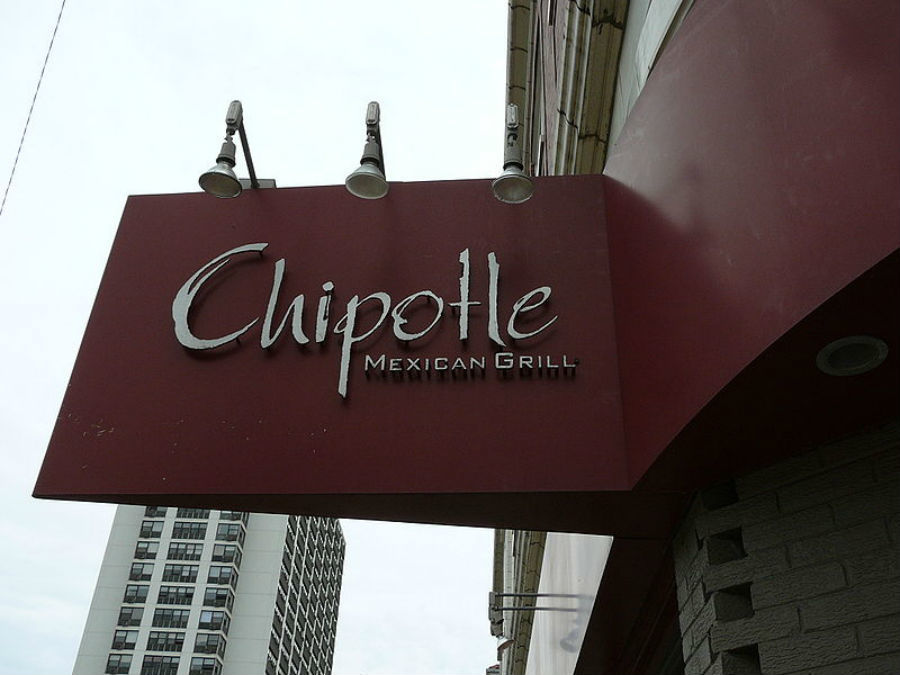 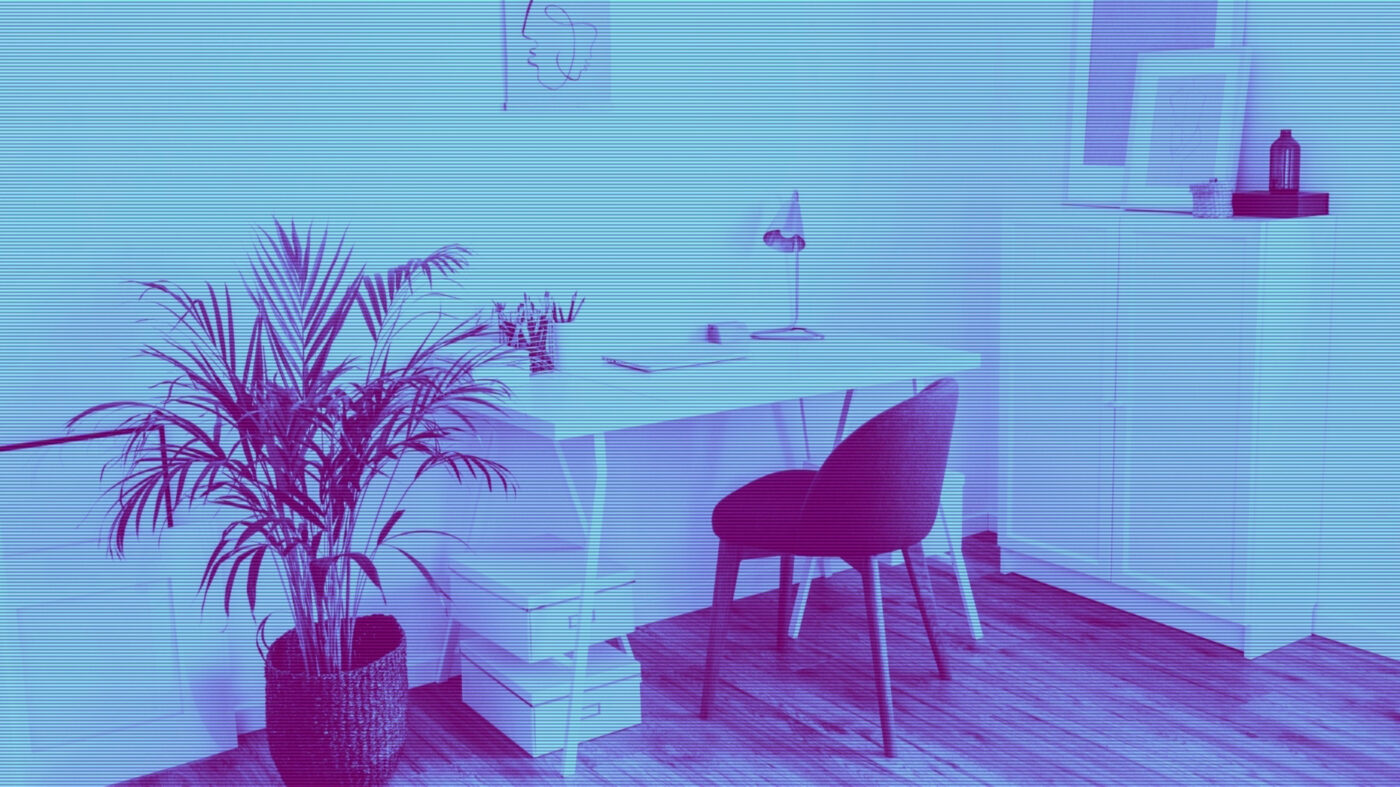