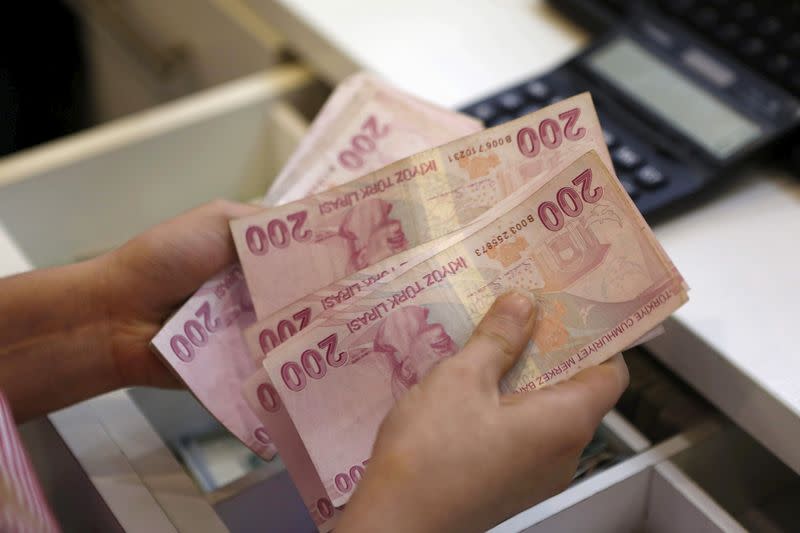 ISTANBUL (Reuters) – The shock departure of Turkey’s top two economic policymakers at the weekend sets the stage for an interest rate hike and other moves to halt a record slide in the lira, analysts said, even as political questions hang over the leadership overhaul.

With no explanation from President Tayyip Erdogan’s government, his son-in-law Berat Albayrak said on Instagram late on Sunday he was stepping down as finance minister after two years for health reasons.

That came after an official notice in the early hours of Saturday that Erdogan had replaced the central bank chief Murat Uysal with a former finance minister. No reason was given for the move, though officials said the currency depreciation was to blame.

The lira jumped as much as 4% against the dollar on Monday, its biggest intraday rally in several months. As recently as Friday it touched a new all-time low after shedding 30% this year, the worst-performing emerging market currency so far in 2020.

The plunge has been driven by concerns over the central bank’s depleted foreign reserves, costly state interventions in foreign exchange markets, negative real rates and the risk of Western sanctions over Turkish foreign and defence policies.

On Monday the new governor, Naci Agbal, said the central bank would focus on lowering high inflation and decisively use all policy tools in a statement that one currency trader described as “market-friendly”.

“Agbal has the power and closeness to go and convey the situation directly to the president,” said a senior official in Erdogan’s AK Party. “It is a difficult post, but steps to stop the rapid rise in the exchange rate must be taken.”

“The reason given was health reasons, but there is obviously more to this than meets the eye,” the New York-based analyst said.

Early on Monday, sources at the presidency finally confirmed Albayrak’s statement, about 15 hours after he took the unusual step of announcing on Instagram that he was leaving government. A Finance Ministry official had earlier confirmed its authenticity. Erdogan would need to approve the resignation.

Turkey, the largest economy in the Middle East, has been hit by two sharp contractions in as many years and its currency has shed some 45% since Albayrak took the reins in mid-2018.

Though economic growth is recovering from the coronavirus fallout, inflation is stuck around 12% and unemployment is high, especially among youth, and is expected to jump again when a ban on layoffs is lifted.

Turkish state banks have sold an estimated $100 billion in dollar reserves this year to support the beleaguered lira but government data shows such interventions have cooled in recent months, with analysts expecting them to ease further under the new leadership.

Economists and opposition politicians have criticised the interventions for exacerbating a sharp drop in the central bank’s net foreign exchange buffer, which has more than halved this year, and for propelling a record rise in Turks’ hard currency holdings.

Analysts at Goldman Sachs and TD Bank expect Agbal, a close ally of Erdogan, to raise the key interest rate by at least 600 basis points as soon as a policy meeting on Nov. 19.

“Many now expect Agbal to quickly hike rates aggressively to stabilize the lira, as he probably would not have taken the post without freedom to pursue orthodox policies,” Brown Brothers Harriman’s Thin added.