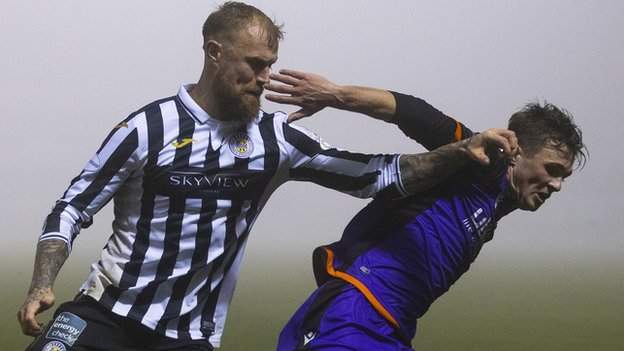 St Mirren curtailed a run of six Scottish Premiership defeats by drawing with Dundee United in their first game in 27 days.

As the fog descended in Paisley, the hosts failed to make their dominance pay off, though they had a penalty shout when Jon Obika was tripped.

However, they did earn their first clean sheet in the league since August.

And the point means they failed to significantly narrow the gap on fourth-place Hibernian in the race for a Europa League spot.

It had been five weeks since St Mirren’s last league game after a number of players had to quarantine due to positive Covid-19 tests. And it was just under four weeks since a League Cup penalty shoot-out win against Queen of the South in their most recent outing.

They started brightly but chances were few and far between. Kristian Dennis went the closest in the first half – almost connecting with a cross – while team-mate Richard Tait had shot deflected over.

United’s Ian Harkes had a shot from distance saved, while Jamie Robson rose highest at a free-kick but couldn’t connect.

After half-time the conditions deteriorated, with the fog making sight-lines difficult. But St Mirren were dealing with it better as they began to look more menacing.

Mason shot over the bar from inside the box, then after a one-two Cameron MacPherson angled an effort just wide of the far post. As the chances began to stack up for the home side, Tait cut inside and whistled a shot wide.

United needed an injection of something and they got it with the introduction of Paul McMullan. Twice in quick succession driving runs from the winger caused problems in the St Mirren box.

However, McMullan nearly cost United the game when he tripped Obika inside the box, but the referee waved away the claims for a penalty.

Man of the match – Richard Tait

What did we learn?

After four weeks of inactivity, there was bound to be a rustiness about St Mirren, but manager Jim Goodwin will have been satisfied with a lot of their play. They were the better side for the majority of the 90 minutes.

United have discovered a solid edge and that’s now three clean sheets in their last four. But, they aren’t scoring much at the other end and they didn’t create a lot in Paisley.

What did they say?

“In the final third we need to be a bit more clinical, but considering what’s gone on here in the last few weeks I couldn’t be any happier with what the team has given me tonight.”

Dundee United manager Micky Mellon: “You respect the point away from home, but we weren’t good enough with the football tonight – that’s for sure.

“We defended the 18-yard box when we had to, but we want to be better with the ball. But we’ve earned a point, so there’s something in there.”

Player of the match