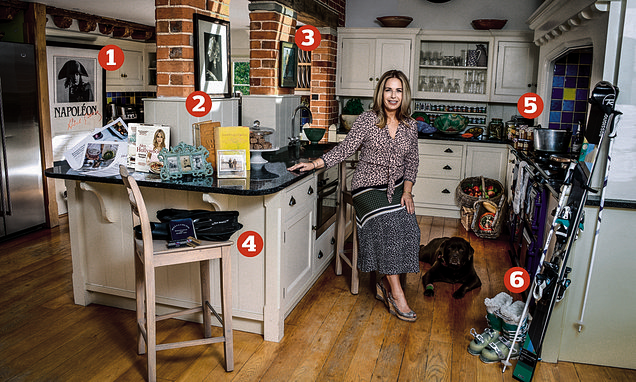 
By Angela Wintle For Weekend Magazine

My kitchen is the heart of my home – it’s where I spend most of my time because I love cooking. Here are the original manuscripts for the two cookbooks I’ve written.

Writing, like cooking, is a very personal experience – you’re putting something down of yourself.

When I was married [to Bake Off’s Paul Hollywood] and helping to run a bakery, I’d often scribble down recipe ideas, but when I started writing for publication it was mainly for magazines or other people.

It was very exciting when my first book was published under my own name.

My mum’s mother Vanda Vangen was an actress. When the Nazis invaded Paris, where she lived, they planned to use her in propaganda films, but she escaped on the last train out of the city in 1940.

It was full but a Jewish film producer gave up his seat for her – he later died in a concentration camp.

I didn’t know Vanda’s mother, because she died when I was young.

Their family came from Norway where they ran fishing lodges for the English Edwardian aristocracy, who went fishing for salmon.

During the war, their village was occupied by the Nazis and my great-uncle, the mayor, was held hostage to deter any resistance. But, thankfully, my family survived.

These fins, log book and ID cards are mementos of my time working as a scuba diver in Cyprus in my 20s.

I went there to learn to dive and subsequently spent several happy summers working as a qualified diving instructor – I was constantly in the water and regularly came across archaeological sites.

There was a sunken Roman wall close to an old port and after a storm I’d often find antiquities on the seabed. My sister came out to join me and I taught her to dive. I also got married out there.

This jam pan has always been in my family. I remember it on my mum’s stove, particularly in the summer and autumn. My parents grew their own fruit and veg in their Kent garden.

Mum made lots of jams and pickles – I remember the sweetness of the jam and the smell of bottling vinegar.

I learnt to cook at my mother’s knee. I’d stand on a small stool so I could see over the kitchen table and Mum would cook with me.

I learnt to ski when I was eight. I used to stay with my French godmother during the holidays in the mountains in Megève.

I speak fluent French, so later on I worked at a chalet in the French Alps where my job was to welcome guests, make beds and prepare dinner.

It was a wonderful way to hone my cooking skills and it also taught me not to get flustered when things go pear-shaped in the kitchen before dinner guests are due to arrive.