The boarded-up windows at The Slater Library in Jewett City had some residents worried that it might stay that way due to the pandemic.

But it won’t. The library is undergoing energy conservation and window restoration projects designed to make the building more efficient. Thanks to grant funding from The Neighborhood Assistance Act, administered by the state Department of Revenue Services, the library can renovate old windows and increase energy efficiency.

The Neighborhood Assistance Act awarded tax credits to businesses that sponsored approved projects on behalf of a tax-exempt organization such as the Slater Library Corp. and Fanning Annex.

The Slater Library hired Bill Champagne, a professional experienced with historical projects, who notified the library board that funds were available. Champagne found the money from a couple of agencies and prepared the proposal.

Project coordinator for the Slater Library Board of Trustees John Haskell worked on grant funding to keep the library afloat, including this project from an 800-page bid. Haskell is concerned that funding from sources like these may not be able to continue.

“We lucked out with this one,” Haskell said. “We have the money from the state direct deposited to us. Our treasurer sends out the money when the architect and I send our approval on work as it is done on the project. Because we are a national historic building, we have to meet criteria set by the secretary of the interior as standards for historical buildings.”

The library’s Romanesque Revival facade still looks like it did in 1884, constructed in granite with brownstone trim. In 2002, the National Register of Historic Places deemed it worthy of preservation and added the library to its list. The library planned to replace the over 100-year-old window sashes with an earlier grant, but the state’s historic preservation office said no. The wood sashes were solid for the most part, so they were required to refinish them instead. Haskell noted refinishing was about eight times more costly than replacement. The Cooper Group of North Stonington won the contract and is currently priming the wood and the windows. Everything’s being done meticulously by hand.

The Slater Library Corp. and Fanning Annex is a non-profit organization, not a townowned entity. It supports both Griswold and Lisbon residents by providing library services, and both towns make donations to the library’s budget every year.

The Griswold Historical Society Museum is on the top floor, exhibiting artifacts and a glimpse of how life was at the turn of the last century.

During this phase of the pandemic, the library is open by appointment. Library cardholders may browse available books at slater.biblio.org and call the library at (860) 376-0024 for curbside pickup. Residents enter the foyer, one person at a time, and keep six-foot social distancing. They can pick up books, get a new library card, and request fax or photocopy services.

Haskell said, “I’ve had people say, what do we need libraries for when we have Google? Well, you may have an Internet connection at home, but that doesn’t mean everyone has that. For a couple of months, we were completely shut down. That hurt a lot of our residents because they had no access to a computer.”

Before COVID, The Slater Library welcomed 300 to 600 people a month using their computers from noon to 5 p.m., four days a week. They had a sign-in program with a safe, public location for tutors and their students.

The Friends of the Library, a separate non-profit organization, also ran some children’s programs, including drive-through crafting, kid’s entertainment, and an American Girl Tea Party. The Friends also organized fundraising bus trips to New York, and chicken barbecues — but all those things stopped.

Without regular patrons, the library had no income from charges like faxing and photocopying or late fees. Yet the costs of payroll, electricity, and heat continued. With help from federal pandemic dollars, they retained all staff on the payroll for the first month of the COVID shutdown, but the library had to find other ways to earn financial support.

Several weekends ago, the library ran a yard and book sale to help offset the income loss. A local scout troop helped lug books down 22 steps from the second floor to the main floor.

The library also received funding from local banks; a recent grant helped them replace every computer in the building.

Haskell said they work to make the library better without costing more to Griswold and Lisbon’s taxpayers. When they need more funds, they dip into their endowment account.

There was more to consider than just windows for energy conservation. Only one out of seven air conditioners worked, and the chimney needed repairs. They installed LED lighting to replace the fluorescent tubes. Energy efficiency equals cost savings.

In the summer, air conditioning is necessary; the library is a cool spot for many residents. They escape the heat, read a magazine, book, or newspaper, use Wi-Fi, and borrow a tablet or use a computer.

Haskell said, “People come here, and by making us more insulated, that helps. So we are putting interior storm windows on all the windows. There will be another air buffer between the window and us. Most of the windows will have an exterior one as well. All the stained glass will be covered. And that’s mostly to protect that stained glass for future generations to enjoy as we do.” 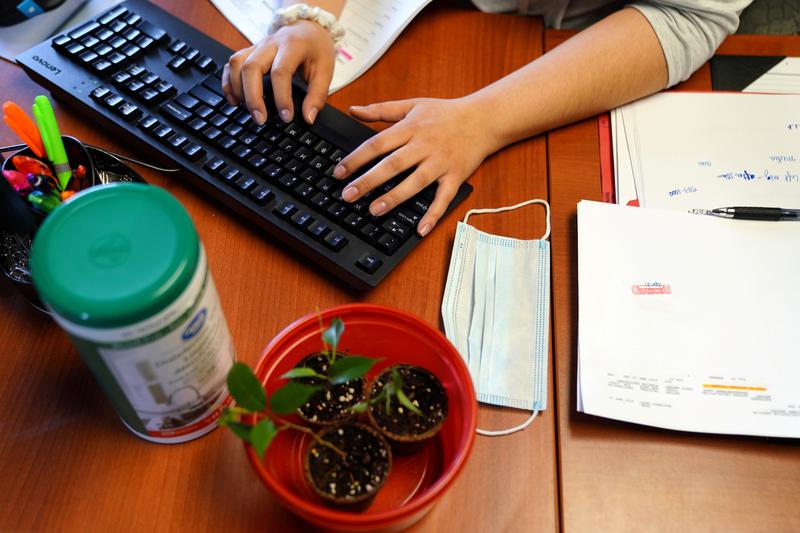