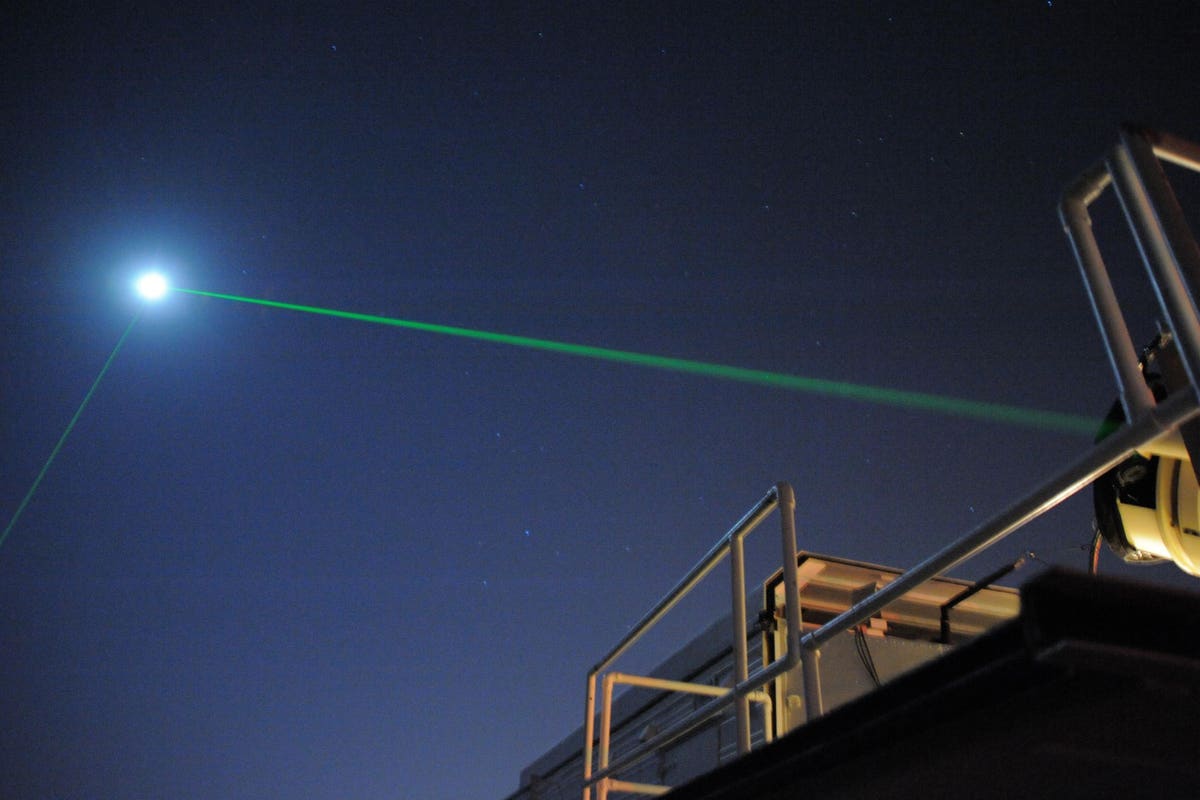 Halfway to Mars, NASA’s Perseverance Rover is carrying an instrument first developed 60 years ago for the Apollo program, but no one is sure whether the rover will actually get to use it. The instrument, a retroreflector, was built to work with a space laser that doesn’t exist yet. When engineers updated the old-school technology, they were betting on a possible future.

Reflecting On The Moon Landings

Perseverance, NASA’s InSight Lander, and the ESA’s upcoming ExoMars Rover all carry small arrays of mirrors, carefully designed to reflect laser light straight back at its source. These retroreflectors, as they’re called, are a simple tool for making extremely precise measurements over very large distances.

The idea is pretty simple: shoot a laser at the retroreflector, measure the time it takes the light to hit the target and bounce back, and then do some quick math to figure exactly how far away the retroreflector is. Over the distance from Earth to the Moon, those measurements can pinpoint a location down to a couple of centimeters. That’s roughly the equivalent of measuring the distance between New York City and Los Angeles to within 0.25mm.

One of the last things Neil Armstrong and Buzz Aldrin did on the Moon – right before tossing a big pile of junk onto the ground west of their lander – was placing a retroreflector nearby. That first retroreflector was about the size of a computer screen and covered with 100 “corner cubes,” each made up of 3 tiny mirrors mounted at right angles to each other. If you take a cube and remove 3 of its 6 sides, you get a corner cube. Those corner cubes were designed to reflect laser light directly back at its source; a retroreflector is a simple instrument, but it has to be put together very precisely.

The crew of Apollo 14 placed another retroreflector at its landing site in 1971, and later that year, Apollo 15 left behind an even larger retroreflector with 300 mirrored corner cubes. Together, they made up the Lunar Laser Ranging Experiment, or LLRE.

Over the last 50 years, the LLRE has helped confirm Albert Einstein’s theory of general relativity; the retroreflectors helped confirm that the Moon’s orbit is exactly what Einstein’s theory predicted it should be. LLRE has also showed us that the Moon is slowly spiraling away from Earth at a rate of about 3.8 centimeters a year, and that the metal in its core is probably still molten from the heat of the impact that formed it.

Perseverance’s palm-sized Laser Retroreflector Array, or LARA, could one day contribute to similar experiments on Mars – with a bonus twist. Because Perseverance and the ESA’s ExoMars Rover will be roaming around the surface of Mars, scientists back on Earth could use their retroreflectors to pinpoint the location of many more points on the ground. That could help track small changes in Mars’ orbit, detect subtle shifts in the ground thanks to Martian geology, and provide data for more detailed tests of general relativity.

They could also drastically improve navigation and landing guidance for future Mars missions. By comparing real-time information from retroreflectors on the ground with the on-board computer’s terrain map, a spacecraft landing on Mars could double-check the map’s accuracy and make last-minute course corrections to keep from crashing into things.

“When the difference between successfully landing near an enticing geological formation or slipping down the steep slope of a crater wall can be measured in mere feet, retroreflectors might be critical,” wrote NASA and the Jet Propulsion Laboratory in a press release.

The InSight Lander, which reached the Martian surface in November 2018, also has a small retroreflector aboard, called the Laser RetroReflector for InSight, or LaRRI). At the moment, InSight uses a radio instrument to listen for tiny movements in the Martian ground it sits on, which could be clues about how the red planet wobbles as it rotates. That wobbling could help planetary scientists figure out whether the Martian core is made of solid or molten metal.

But a retroreflector could give even more precise data about the lander’s position, including its height. That, in turn, could help measure tiny expansions and contractions in the Martian crust, which could offer new insights (not sorry) about the planet’s seismic activity. For the moment, however, InSight can’t use the instrument; we have no lasers that can reach a retroreflector on Mars

On average, Mars and all the robots we’ve sent there are 401 million kilometers (249 million miles) away from observatories on Earth. No laser on our planet can reach that far and reflect back enough light for even the most sensitive instruments to detect.

The LLRE lasers have to make a round trip of “just” 770,000 kilometers (478,000 miles), and even then, the light that returns to Earth is too scattered for the unaided eye to see. Think about a flashlight beam; the beam gets wider as it gets further from the source. Lasers are tightly focused beams of photons, but the beam still widens as it travels. By the time the laser beam hits the Moon, it’s about 6.5 kilometers (4 miles) wide; when it returns to Earth, it’s 20 kilometers wide. The same number of photons are scattered over a much wider distance.

Out of every 100 quadrillion photons that hits the lunar surface, only 1 makes it back to the source. Astronomers at observatories like the Lick Observatory in California, the McDonald Observatory in Texas, and the Air Force’s Cambridge Research Labs Lunar Ranging Observatory in Arizona rely on high-tech equipment to filter and amplify the reflected light. But we don’t have lasers powerful enough or instruments sophisticated enough to pull that off for Mars.

The best solution, according to engineer Simone Dell’Angelo of Italy’s National Institute for Nuclear Physics, who led the development of all three Mars retroreflectors, and her colleagues, is to put a laser aboard a satellite in Martian orbit. That’s what the retroreflectors aboard Perseverance, InSight, and ExoMars were built for, and that’s why they’re so much smaller than their predecessors aboard Apollo. They’ll be much closer to the laser source, so they don’t need to offer such a large target. In turn, because they’re small, it was easier to find room (and weight allowance) for them aboard the Mars missions.

Even so, the fact that any mission carried a retroreflector to Mars is a little surprising, because no laser-wielding satellite currently exists, and there’s not one on the list of planned space missions for any space agency – yet. In other words, these missions are carrying old-school technology to Mars in hopes that a future Mars mission will enable it to help even further future missions.

Meanwhile, the LLRE is still lighting the way. Decades after the last astronaut left the Moon, scientists are still aiming lasers at the Lunar Laser Ranging Experiment: the three retroreflectors planted on the Moon by Apollo 11, 14, and 15. And they’re still learning new details about how the Moon’s orbit varies with the tidal pull of Earth’s gravity. That’s because engineers keep improving observatories’ lasers and the instruments that catch the reflected laser light, which means scientists can collect better data than they could in the 1970s.

“Technical improvements at the observatories rejuvenate the lunar laser ranging efforts,” said Jet Propulsion Laboratory astronomer James Williams, part of the team that analyzes LLRE data, in an earlier NASA statement. “When the range accuracy improves, it’s like getting a new experiment on the Moon.”